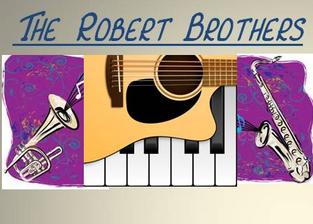 Trumpeter Jon "Robert" Fletcher and Saxophonist Ken "Robert" Tonge have been friends and musical cohorts since their college days at the University of Delaware. Along the way, they've played together in a number of different bands. For the past twenty plus years, Jon and Ken, along with sax player Grier White, have comprised the horn section for the Delaware-based classic rock and soul cover band, "the Funsters". Through years of playing together, their blend has become instinctive and their combined sound, distinctive. In addition to their work with "the Funsters", Jon and Ken have been involved with many other musical ventures as recording studio session players and as contracted musicians. Most notably, they've had the opportunity to play with such legendary Motown artists as the Temptations, the Four Tops, and Martha and the Vandellas. You'll also find them playing along with fellow Funster drummer/vocalist Ed Shockley with the R & B/Americana band Vinyl Shockley. Jon and Ken provided the Memphis-flavored horns on all four Vinyl Shockley CDs.

In addition to playing horns, both Jon and Ken sing and play keyboards and guitar respectively. For several years, they've toyed with the idea of forming a duo which would allow them to pursue other musical avenues. Recently they've gotten together and compiled a repertoire that spans a number of genres, from Buffet to the Beatles, Elvis to Van Morrison, Memphis to Motown Soul, Rolling Stones to Sinatra standards, and many others. In addition to playing piano and guitar, through the use of digital music technology, they've been able to include their signature horns on many selections, including several Chicago covers.

The Robert Brothers are available for weddings, receptions, parties, happy hours, etc., etc. Their repertoire can be tailored to meet the needs of your specific event. For additional information please contact us.